Today was David's graduation and it was awesome!! David has come along way in his journey to becoming a more charactered individual. In his grad panel he related himself to a rubics cube and how when he was younger he had all the right colors on the right sides and was doing the things he should so the sides would stay the same. Then he started doing things that messed up the sides and made him lazy and unmotivated. Then he was sent to DRA, and DRA was able to teach him the right "moves" or tools to get his rubics cube back to having all the colors on their correct sides. It was a cool way of portraying his progress, and one we will all remember!!

Congratulations David!!! You deserve it!! ﻿
Posted by Diamond Ranch Academy at 8:14 PM No comments:

It's time for some baseball!! DRA has added a batting cage to it's facitlity. The boys were able to participate in setting up the new batting cage and had a blast doing it.

It was quite a project getting all ground level and the net hung up but as you can see it was totally worth it. 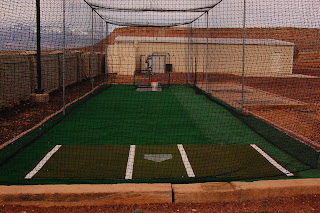 This thing comes fully loaded with a "utah net" and turf along with a home plate. 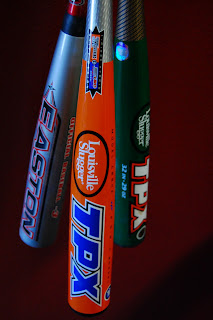 Here are some of the tools that will be used to do some business in the new batting cage!!
Posted by Diamond Ranch Academy at 7:22 PM No comments:

Super Bowl Monday!! We had an amazing party with all the boys for the super bowl. The coolest part of the event was the stuff we did before. The boys had to pay for their tickets the wednesday before at court. We had a lot of students that had their best week(as far as points go) during that week. We had decorations and tons of treats, the boy's names were put into door prize drawings and also drawings at half time. 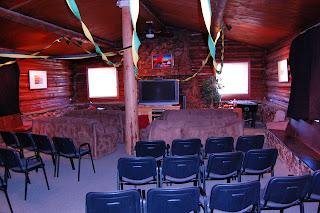 We re-arranged the cabin a little to accomodate the big group. 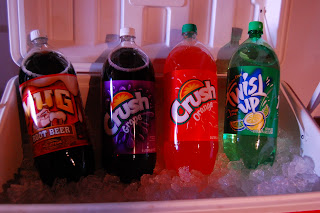 Some bubbly to wash down the goodies. 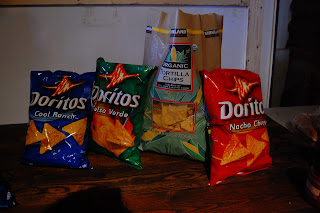 You can't have a superbowl party without Doritos!? 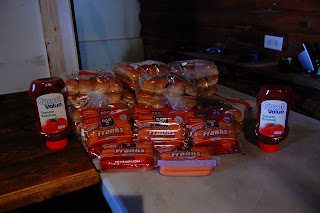 Nothing goes better with doritos than a good old hot dog! 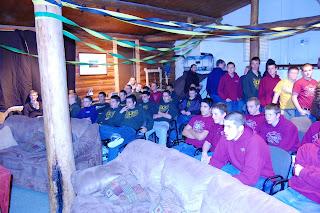 Sorry about the glare from the TV but as you can see the boys were pretty into the game! 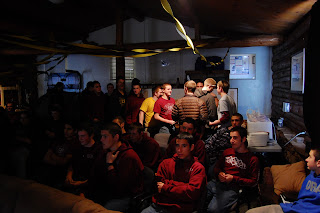 We had "box" seats as well as nose bleed seats and the students were placed according to how much they paid for the tickets. this is just a small part of the "real life" part of DRA's token economy. The box seat guys got to go first for the food and got half time treats. It was awesome to see how many students want to buy the box seats for the next event. Thanks fellas for a good time!
Posted by Diamond Ranch Academy at 7:06 PM No comments:

Marathon Madness!!
DRA was able to attend and volunteer at the local half marathon. The boys who got to go really enjoyed it and want to go to the next one coming up at the end of February. We handed out the snacks at the finish line of the race for all the runners. It was hilarious to see some of the outfits that the runners had on. I didnt get any pictures but they were pretty outrageous! 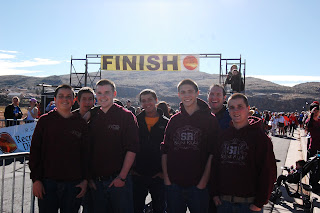 Here the boys are at the finish line of the marathon. 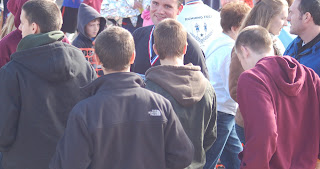 One of DRA's finest(And a Therapist) ran the race. Kade ran it and then took the time to talk to the boys after he had finished the marathon! Way to go Kade!
Posted by Diamond Ranch Academy at 5:21 PM No comments: